Email us for more info 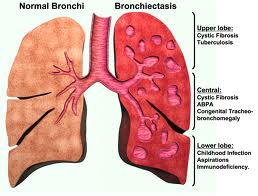 Bronchiectasis (brong-ke-EK-tah-sis) comes from the Greek words “bronckos” (airway) and “ektasis” (widening). It is the abnormal widening of the airways in the lungs usually caused by damage to the airway walls. This should never be mistaken for bronchitis.

Bronchiectasis is a common lung disease characterized by a chronic infection in small airways that results in some parts of the lung becoming damaged, scarred and dilated, allowing infected mucus to build up in pockets. This condition is characterized by a persistent cough with excess amounts of mucus and, often, airflow obstruction together with episodes of worsening symptoms.

In healthy individuals, glands in the lining of the airways make small amounts of mucus, which keeps the airways moist and traps inhaled dust, dirt and organisms. Usually, when mucus becomes excessive, it is either coughed up and out or swallowed. However, in people with Bronchiectasis, the mucus pools where the airway is widened and makes the person prone to recurrent respiratory tract infections.

For Bronchiectasis to develop, it requires a condition which does one of the following:

In the case of adults, although many people who develop Bronchiectasis have been smokers, there has never been a direct link between smoking and Bronchiectasis. Although lung conditions like Chronic Obstructive Pulmonary Disease (COPD), including Bronchitis, Asthma and Emphysema in adults may lead to an adverse immune system overreaction which results in Bronchiectasis. Similarly with Bronchiectasis, if not treated, can develop into atelectasis.

How to Manage and Treatment of Bronchiectasis

Management of Bronchiectasis is complex because of the variety of underlying causes. Clinical decisions around the management of the condition are made based on individual presentations.

Treatment for Bronchiectasis may include:

What happens over the years with Bronchiectasis?

Patients tend to have ongoing symptoms, but these can generally be controlled with treatment, and the vast majority of patients live active independent lives. A small proportion of patients develop rapidly progressive/severe disease, and for these patients, more aggressive management and regular review by a respiratory physician are recommended.

How Does AirPhysio Help Treat Bronchiectasis?

By using the AirPhysio PEP device to clean the airway and condition the lungs, this will assist in clearing out the pockets of mucus, as well as a physiotherapy method to assist in the maintenance of Bronchiectasis.

AirPhysio assists in the treatment of Bronchiectasis in 2 distinct ways:

1. Firstly the combination of the Positive Expiratory Pressure combined with the oscillating effect helps to reduce the elasticity of the mucus, allowing the device to loosen the mucus from the airway walls to assist in the mucus clearance process through the two stages of the AirPhysio mobilization and elimination method.

2. Secondly, the vibration AirPhysio including the deep breathing method, assist in conditioning the airway and assists to improve lung capacity through a physiotherapy method of exercising the lungs.

For more information about Bronchiectasis, please refer to the following web pages and articles:

Many people ask the question “How can eating something cause me to have an asthma attack in my lungs”. The answer is simple, but to

With all of the bush fires around the East Coast, and many people have experienced the effects of smoke inhalation. It is important to understand

Paul O’Brien, Managing Director of AirPhysio Mucus Clearance OPEP Device, talks to Kathy Ireland on the US TV and Bloomberg International to talk about Lung

Do you suffer from Getting Older, Colds and Flu or Asthma?